An Interactive Archaeological Museum of Aegean and Cypriote Collections in Tuscany

The project on which we are reporting has been carried out in Florence, concerning a virtual interactive museum in the archaeological area. 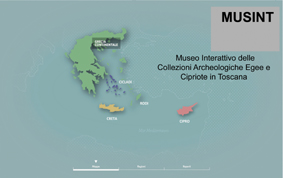 The idea of an interactive museum collecting Aegean and Cypriote findings from various institutions in Tuscany arises from two different reasons. The first is that in many cases there is a difficulty to access to artistic findings either because they are not usually exhibited to the public or because they are located in different places and a comparison among them is not immediate.
The Collections which constitute the object of our museum come from five different Museums in Tuscany:

The second reason at the basis of our project is the following: gathering together all these materials in a single virtual museum, which is based on information and communication technologies, is particularly important, since responds to the general need of a better fruition of the archaeological and artistic patrimony.
The target of MUSINT includes visitors interested in scientific research, who have simultaneous access to 3-dimensional representation of the object, to technical reports and databases, and curiosity driven visitors, and, finally, younger visitors from primary or advanced schools. For the latter category a special section is also offered, with attractive drawings and reconstructions, as will be shown in the following.
As a whole, MUSINT tries to reconcile in the same structure scientific and educational purposes.
The project has been carried out by different expertise units, directed by A.M. Jasink: