The Kouris River Valley Project was started by an initiative of Anna Margherita Jasink who succeded in obtaining from the Department of Archaeology, Cyprus, the permission for an archeological survey in the area of the Kouris Valley, a successful survey that was the premise for the proper archaeological mission and excavation. Initially, the enterprise was a joint project of the University of Florence and the University of Chieti "G. D'Annunzio".

The aim of the project has been to investigate the whole area of the Kouris valley, i.e. the carbonate hills area extending on the western side of the Limassol harbour, from the southern slopes of the Troodos massif to the Episkopi bay. This research has a double purpose: 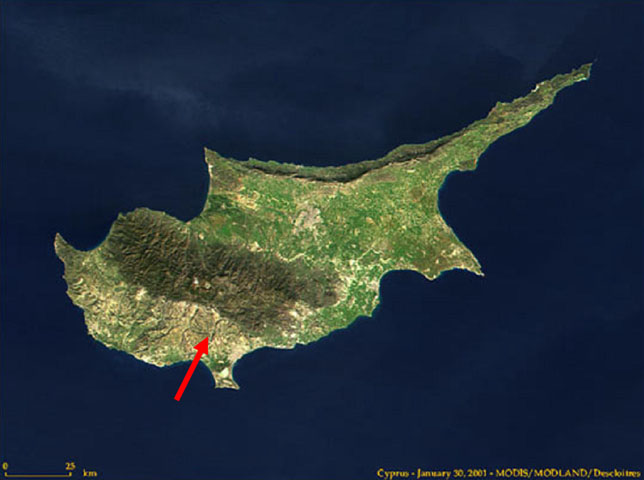 The 2007 season of the Italian Archaeological Mission in the Kouris valley has been carried out by a joint expedition of the Universities of Florence and Chieti "G. D'Annunzio", from September 4th to October 6th 2007, under the direction of Anna Margherita Jasink.

The aim of this season of research on field in the Kouris river valley was to investigate the sequence of occupation, mainly during the II Millennium B.C., in order to outline the frame and the development of the settlement system in the valley area.

The surveyed area has shown the presence of a series of Bronze Age settlements with different functions (necropolis areas, workshops areas, domestic or farm settlements). Further evidences of a later occupation of many of the areas, in particular during the Archaic and Geometric period, seem to be relevant in order to verify a continuity in the sensible transitional phase Late Bronze Age / Iron Age. Later Phases are also attested by wide diffused materials coming from Classical and Hellenistic periods to Roman, Medieval and Post- Medieval periods.

Fig. 2: Digital Terrain Model. It consists of the schematic Digital Elevation Model with the overlaying of the natural appearance from the high definition satellite photo.

The methodology of the research, as usual in landscape archaeology for intensive field survey, has been based on teams walking the fields in parallel lines, employing a 40% sampling strategy of the territory. The results of the survey are recorded, in part during the survey, and partially in post processing, in a multilayer GIS database using high definition satellite images and maps as topographic base, and acting as a collector of the data from the field survey, the Remote Sensing, the geological survey and integrated also with the intra-site GIS for specific sites. 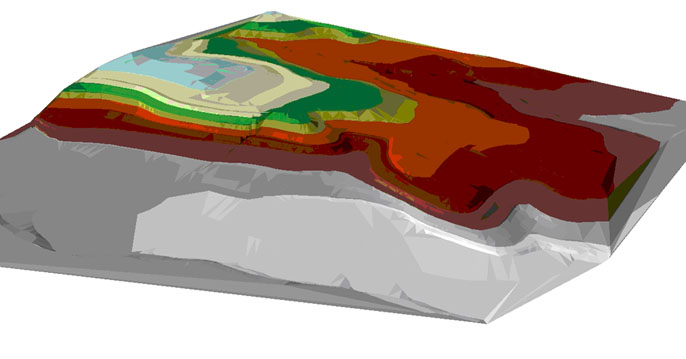 Fig. 3: Schematic Digital Elevation Model of the area of the Kouris valley.

The sites which have been mapped in the season 2007 are 10, located within an area of 2 Km2. Some of them appear particularly interesting.

Three sites (sites 1, 2, 10) are located on the hilltop ridges looking the Kouris valley and controlling either the local road network, passing to the east of the settlement and interconnecting them, and the wider road connections on the upper eastern terrace. Moreover the evidence of the lower river terrace site 3 is relevant, where a huge quantity of materials has been collected mostly on the southern area of the site. It belongs mainly to the EBA and MBA Red-Polished production and stresses out the possible presence of a small farm settlement here located just along the river.

Two rock-cut tombs necropolis areas have been also evidenced. The first (site 4) is largely damaged by the realization of a modern road, on the west side slope of site 1; the small quantity of the collected materials points mainly to a Bronze Age period date (few Red-Polished sherds and LBA common ware as well are evidenced). The second (site 5) flanks a lower road on the western side of the river valley, north to the sites 1 and 3. The pottery which comes from the nearby surface is mainly related to the Geometric and Archaic periods production: interesting are the evidences of few Bichrome and Painted ware sherds, belonging to big anphoras and small open vessels; some later records of Roman pottery has been also collected.

The Kouris river valley project has obtained new interesting results during the 2008 season, confirming hypotheses formulated in the 2007 report and leading to further working proposals for the future. The work on field, started September 11th and concluded October 4th 2008, has been developed two following main platforms/lines:

We have completed the survey on the western river bank of the Kouris valley. The situation seems differing from the eastern side: the only relevant findings go back to the Hellenistic/Roman period and are confined into two sites (sites 12 and 13) located in the low terraces in the southern area of the valley. Probably, the morphological situation (steep slopes from the dam to the roman terraces) has conditioned a north-south human transit along this river side. We may hypothesize that during the second Millennium B.C. the route from the Alassa area or from other settlements next to the high course of the Kouris to the coast followed its eastern side. This working proposal will be discussed in deep in the future, with the help of further data.

On the eastern side of the river we have revisited the site 3, where we hypothesized the presence of a "farm" with an occupation during EBA-MBA period on the basis of the high surface diffusion of Red-Polished ware. The theory has now been supported by the results of the geophysical survey with a Magnetometer. As to site 5, where some tombs of uncertain date have been already identified, during this season also important icnofossils and a paleosoil dating to prehistoric period have been brought to light. Concerning the whole valley, a sampling of different soils and sediments has been carried out. Moreover, we have identified the fabrics of the different wares collected both during survey and excavation. Both these researches aim to identify the sourcing areas for wares and their chemical/mineralogical composition. A further analysis concerns the study of toponomastic repertoire of the valley area with the aim to outline a general picture from a linguistic point of view. As a preliminary starting point the name of Alašiya and local "speaking-names" have been sampled.

This year we have limited our excavations to the site of Erimi - Laonin tou Porakou (site 10), i.e. the most northern site which has been surveyed last year on the eastern side of the Kouris.

Four trenches have been carried out, both on the hilltop of the mound (Area A) and on the two lower rounding terraces (Areas B and C). The excavations allow to hypothesize the presence of structures dated back to the EBA-MBA period, as confirmed by the ceramic evidence: from all the excavated trenches the Red-Polished wares are the widely most attested production within the pottery assemblage. A complex system of a double circuit wall has been identified. The trenches here carried out in A and B areas (A1 and B1) revealed a sequence of two phases: the first one possibly dates back to the Red-polished period, the second (on a quite different circuit) dates to the Hellenistic-Roman period. For the reconstruction of these phases of the walling system, both a topographic plan by total station and an aerial photographic documentation have been used. 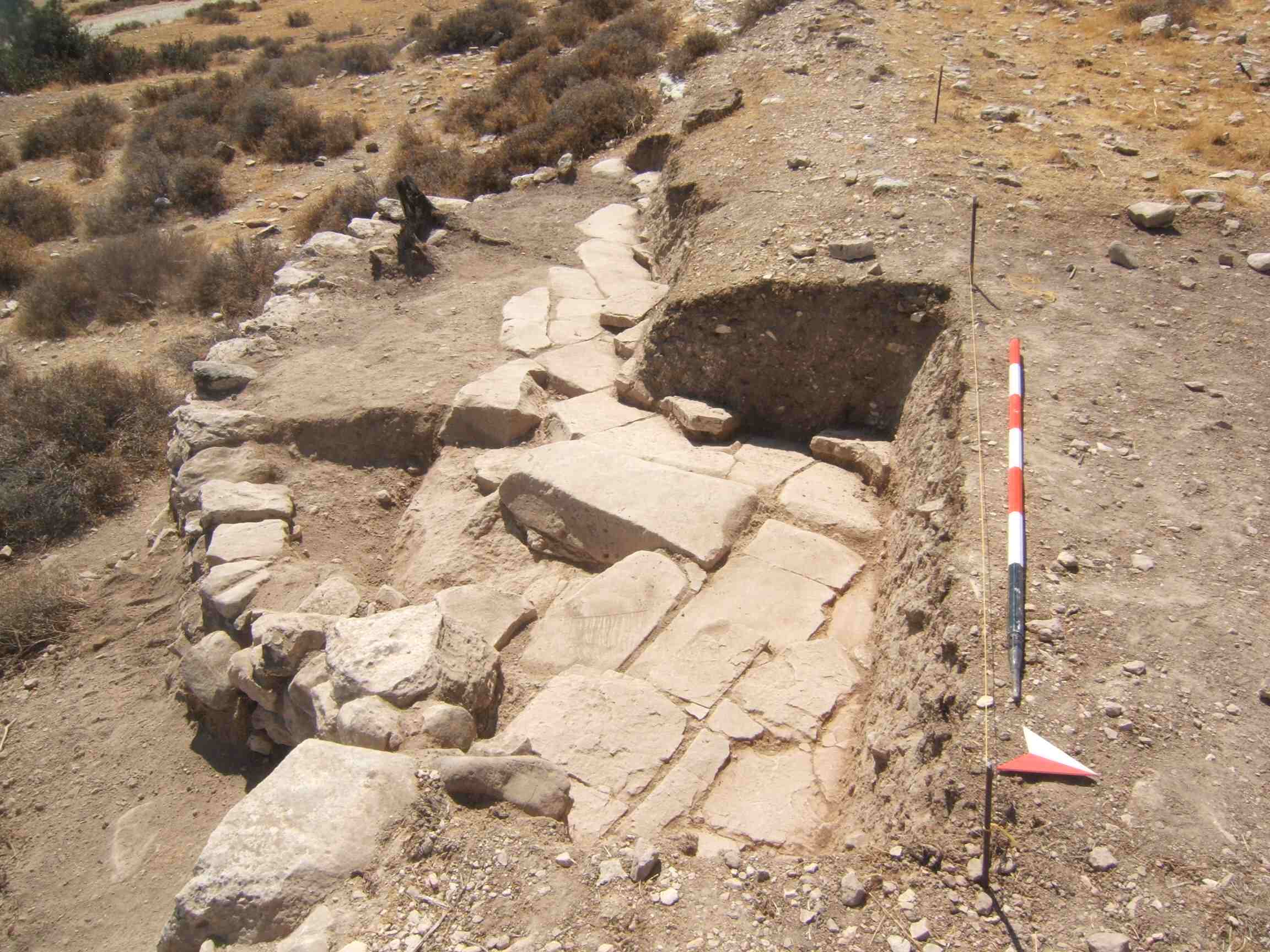 A larger trench on the hilltop (trench A2) cleared the presence of a big workshop area, possibly intended for the processing of leather or textiles, as could be suggested by a series of inter-connected basins and channels in the bedrock. The spindle-whorls and loom-weights coming from this workshop area also point to this specific activity. In a small cemetery area in the third lower terrace (Area E), a series of three rock-cut tombs have been excavated (Tombs 228-230). Among the grave-goods found inside two of these tombs, a large repertoire of vessels of Red-Polished ware and some small objects (decorated spindle-whorls, picrolite ornamental disks) came from. 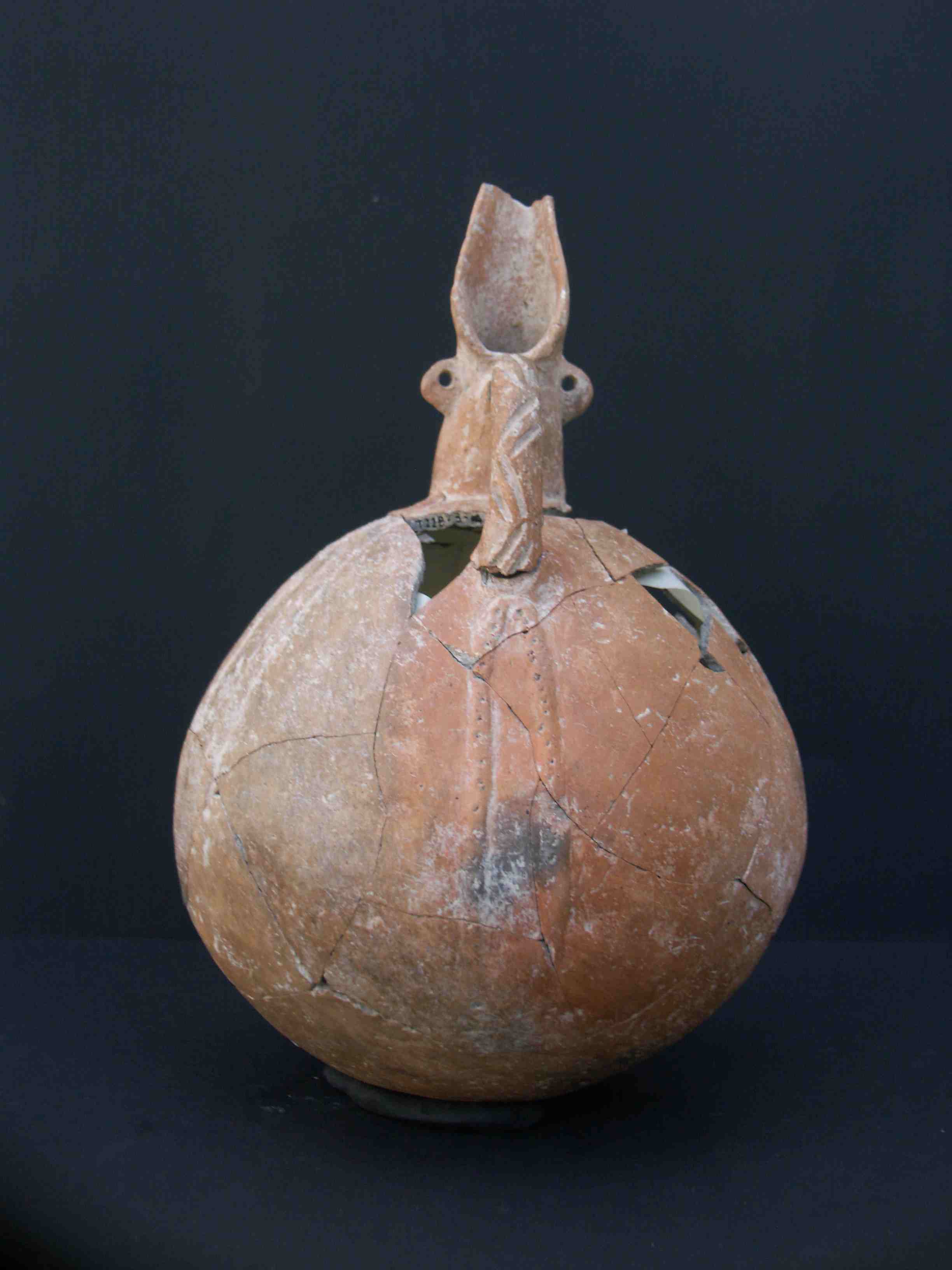 We can interpret the similarity of the finds from the contemporary funerary and workshop contexts as part of a craftsman equipment. The anthropologic analysis of the human bones remains from tombs 228 and 230 has revealed respectively a multiple inhumation of three individuals (a man, a woman and a child) and of a single inhumation of a woman.

The KVP has since been continued. Updated information can be found searching for Erimi -  Laonin tou Pourakou

The works on field have been realized thanks to the scientific collaboration of Prof. P. Flourentzos, Director of the Department of Antiquities of the Republic of Cyprus. Our great thank goes also to Mr Y. Violaris, Department of Antiquities and Director of the District Archaeological Museum of Limassol, for his constant and kind help and suggestions, as well as for solving our problems and requests; a thank also for the kind accommodation in the Kourion Museum in Episkopi. A particular thank for her support is due to Dr. M.R. Belgiorno, Director of the Italian Archaological Mission in Pyrgos. Moreover, we are particularly grateful to the Italian Ambassy and Consulate, for helping us in practical and burocratic matters. We have also mention that the project has been supported by the Universities of Florence and Turin, the Department of Antiquities and the CAAM (Centro di Ateneo di Archeometria a Microanalisi) of Chieti University, the Cassa di Risparmio di Firenze, the Consiglio Nazionale delle Ricerche, and therefore our thanks go also to them as constant sponsors and supports of the mission. Moreover, we also want to thank the Museum of Natural Sciences of Chieti, prof. Gabriella Vitullo and the Director Prof. L. Capasso, who have joined us this year with their collaborators, giving us their valid scientific support on Paleontological and Anthropological matters.